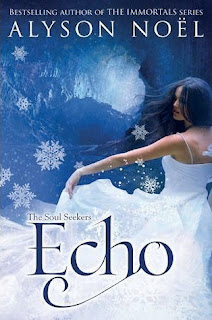 Daire Santos has already saved her grandmother's life and her soul. But at a cost: the Richter family has been let loose in the Lowerworld. Daire and her boyfriend Dace Richter must work together to find them before chaos ensues and the balance between good and evil is destroyed. As their relationship deepens, Dace's evil brother Cade grows stronger than ever, building his power and forcing Daire and Dace to confront the horrifying prophecy that has brought them all together. It will leave Daire no choice but to claim her true destiny as Seeker, but only by making an unthinkable sacrifice.

A big thanks to Pan Macmillan for sending me a review copy of this book!


After loving Alyson Noel's Fated so much more than her other young adult series Immortals, which had fell quite short for me, there was still this great and sudden excitement swooping in when I began reading this second installment of Noel's newest series!

ECHO, the second installment of the Soul Seekers series, is centered around the very intense and  sweet blossoming relationship between Daire and Dace, and how they must find a way to put a stop to Dace's evil twin brother, Cade, who wants nothing more than to destroy them both and take over the world like most evil villains like to do. In the beginning of the book Daire and Dace's relationship is finally beginning to go somewhere until Cade slowly bides his time in making sure their romance does not last long and with him getting stronger by the day - with his brother growing weaker also - there is this undeniable truth that Cade might just succeed so Daire must muster all of the strength and love she can to put a stop Cade once and for all. But the question is . . . is she able to do it? Even if it means losing Dace in the end.

To put it simply, I loved this sequel just as much as the first book. Whether it had a lot to do with the sharings of POVs between our two main characters, Daire and Dace, or because it was a much darker storyline than the first book, I think what did it for me the most was that ECHO just had a much clearer storyline and it certainly answered a lot of my questions from the previous book, Fated, which was a very nice surprise since most series continue to baffle me with the details. Another thing to point out and without spoiling, what I enjoyed about this book was how we got to know and understand Daire - not to mention her own destiny - and seeing how her relationship develops more with Dace. I can't deny that those two are super cute together. Even though Dace's perspective was interesting and perhaps a little too . . . hard to connect with from time to time but I do love those two together and I really hope everything works out for them both in the next book because there are a lot of complicated events happening in the book and that's just beyond cruel. So cruel indeed.

Overall, ECHO was a very surprising sequel and I'm glad it lived up to my expectations. With a plot that grows darker by the second and with love trying to conquer all, I think many readers will enjoy this book and it's definitely one of my favourites coming from this author . . . like ever!