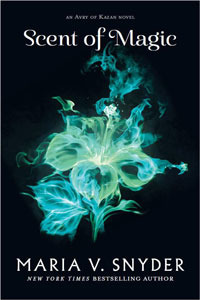 Hunted, Killed—Survived?
As the last Healer in the Fifteen Realms, Avry of Kazan is in a unique position: in the minds of her friends and foes alike, she no longer exists. Despite her need to prevent the megalomanical King Tohon from winning control of the Realms, Avry is also determined to find her sister and repair their estrangement. And she must do it alone, as Kerrick, her partner and sole confident, returns to Alga to summon his country into battle.Though she should be in hiding, Avry will do whatever she can to support Tohon’s opponents. Including infiltrating a holy army, evading magic sniffers, teaching forest skills to soldiers and figuring out how to stop Tohon’s most horrible creations yet; an army of the walking dead—human and animal alike and nearly impossible to defeat.War is coming and Avry is alone. Unless she figures out how to do the impossible ... again.

A big thanks to HarlequinTeen Australia for sending me an ARC copy of this book!

For those readers who know me well enough (mostly judging by my reviews), you would know of my EPIC love for Maria V. Snyder's work and in the second installment of the Healer series, SCENT OF MAGIC, the author has yet again impressed me with her splendid words of wisdom, beautiful settings and down-to-earth character interactions. Really I should not be too surprised by saying these words . . . she's honestly one of my favourite authors out there right now!

Like in all of Maria V. Snyder's books, the one thing I've always admired about her is how she writes incredibly strong, witty, and sassy young women as her female main leads, and Avry is clearly all of that combined, especially in this sequel! Avry has always possessed this great voice and it's a true pleasure to see how she interacts with the things all around her, including the supporting characters. However, unlike in the first installment of the series, readers are introduced to Avry's perspective once more AND also to Kerrick's, Avry's main love interest, perspective which, for me, was quite an interesting turn and a very exciting one at that. Being able to not only hear Avry's side of things but also Kerrick's just made me giddy on the inside because I really have lot's of love for Kerrick's character and while he may not have spent a lot of time actually being with his girl, Avry, but viewing his side of things was a real treat.

While I cannot giveaway the storyline (because that would seriously suck for you), but I can say in cruelty for those who have yet to read this sequel . . . the cliffhanger at the very end was such a killer! A real killer. Literally I was so shocked beyond belief and I seriously can't believe I have to wait so long for the next installment to arrive. I just hope everything is cleared up by then but until that day comes . . . I'll just patiently wait here at home as long as I can . . . even if it kills me!

Overall, SCENT OF MAGIC was everything I hoped for and more from Maria V. Snyder! Full of action, deceit, danger, and with a little bit of romance to settle down our fangal feels of many, many emotions, I can definitely say I'm impressed. Really impressed, even if I preferred (at times) the first book of the series to this one.